Rare opportunity in Goleta's largest commercial building.
Over 170,000 SF multi-tenant property on 6 acres.
The property resides a short distance from Santa Barbara Airport, UC Santa Barbara, public transit and retail amenities.
Goleta is a city in southern Santa Barbara County, California. It was incorporated as a city in 2002, after a long period as the largest unincorporated, populated area in the county. The population was 29,888 at the 2010 census.

Search for similar industrial spaces for rent in Goleta, CA 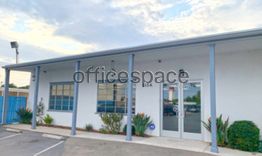